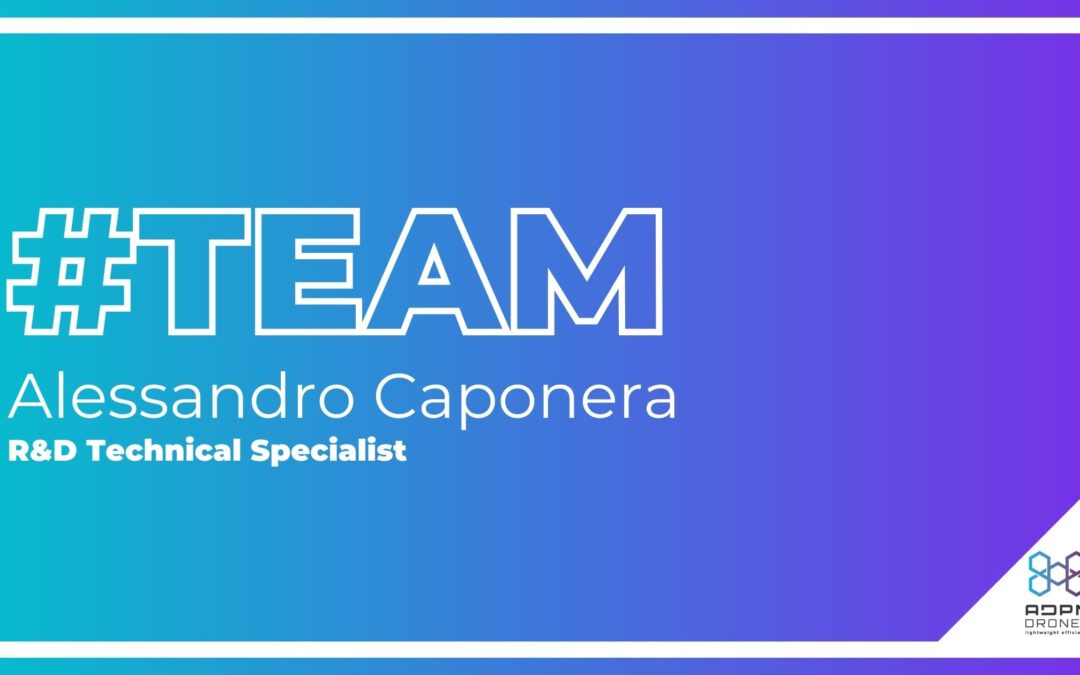 For the second appointment with the presentation of the ADPM Drones team, it’s time to discover who Alessandro Caponera is and what he does. He is a test pilot and technician specialized in the assembly and programming of drones. A professional who, with stubbornness, spirit of sacrifice and competence, has managed to turn his passion for remotely piloted aircrafts into a job.

“I’ve been flying model airplanes and drones for 12 years and at the moment I’m in possession of the pilot’s certificate Open A1 – A3 category, which allows you to fly with drones weighing up to 25 kilograms in Visual Line of Sight, at a maximum height of 120 meters and with the prohibition to fly over people. I would like to add that according to the current regulation, subcategory A1 allows to operate with drones with a mass of less than 250 grams and in some cases even in urban scenarios, while subcategory A3 allows to fly with drones with a mass of less than 25 kilograms but at least 150 meters away from urban areas”.

One of Alessandro’s strengths was approaching the sector as an autodidact, since the initial spark was due to his interest in piloting helicopters, later expanded with multirotor drones and a growing enthusiasm for autopilot control units. The first step, in 2009, was the enrollment in a model airplane camp in the province of Rome, where the first meeting took place with Luca Brizzi, who would later found ADPM Drones. “Faced with my obvious passion Luca proposed that I collaborate to help build drones, so in 2016 I started the first assembly projects in the free time I had, since I worked as a technician in a multiplex cinema”.

Carrying out two such different activities was not easy but obligatory at that time: “I had not yet fully understood the potential of the drone industry and the impact it would have in so many different scenarios and markets.” Doubts dissolved by time, with the diffusion of drones and the growth of ADPM Drones: “The crisis in the entertainment world that peaked during the pandemic was useful to erase the last perplexities and accept Luca’s proposal for full-time employment”.

Alessandro has clear ideas about the growing attention towards the drone market: “It’s a tool that has no equals, since it allows us to operate and reach inaccessible places reducing the risks almost to zero, offering many services that would otherwise be impossible or expensive with other solutions”. Of course, there is always room for improvement, especially at the regulatory level, as “the sector needs to simplify regulations for long-haul flights”.

Waiting for improvements that could widen the range of action of companies and pilots, Alessandro has also approached design and 3D printing: “I’ve studied a lot in the last five years and now I exploit the acquired skills to create and develop mechanical supports on drones, following the requests of the team and proposing shapes and uses able to improve the solutions of ADPM Drones”.